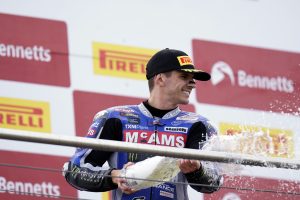 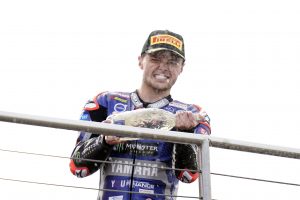 The fight is on for the McAMS Yamaha team as they head to the final rounds of the 2020 Bennetts British Superbike Championship at Brands Hatch this weekend with both riders in contention for the crown.

Australia’s Jason O’Halloran sits just 19 points behind series leader Josh Brookes ahead of the weekend’s final three races, with team-mate Tarran Mackenzie 46 points off the top of the table meaning he too is mathematically in contention for the title.

The series will conclude with Rounds 16, 17 and 18 of the championship held over the 2.4-mile Brands Hatch Grand Prix circuit – offering O’Halloran and Mackenzie three chances to do all they can to get their hands on the coveted BSB trophy.

It has already been a record-breaking season for the McAMS Yamaha team and 2020 YZF-R1 with four victories and 12 podium finishes marking the team’s best season to date in the championship.

Having featured on the podium at all but one event so far this season, the team are confident heading into a venue where the R1 has performed well in the past.

Practice gets underway for the event on Friday ahead of qualifying and the opening race on Saturday before the season concludes with two races on Sunday with qualifying onwards broadcast live on Eurosport.

Jason O’Halloran
Championship Pos: 4th – 206 points
“I am really looking forward to getting stuck in at Brands Hatch. We have been fast pretty much every weekend this year, so I am confident. Brands has always been a good circuit for me and it was a great track for the old R1, and this new bike is a big step forward. Donington could have gone better – the pace was there as we showed in the second race, but we’re still in the hunt and it’s not over. The job has to be to aim for victory in all three races and the championship will sort itself out, all I can do is try to win the races and if I do that the rest of it is out of my hands! There are five of us in the title fight and you always see those not involved in the title fight up there at the end of the year too so there’ll be some close, hard fought racing. We’ll be giving it our all!”

Tarran Mackenzie
Championship Pos: 5th – 179 points
“Donington was a special weekend for me, I’ve always wanted to win there on a superbike so I left feeling pretty happy! Brands has been a good track for me in the past, I nearly got my first podium there in 2018 and I’ve been fast every time we’ve been there. The Yamaha has always worked well there and the pace we’ve had at nearly every track this year has shown the new R1 has helped us take a big step forward. I’m not thinking about the championship, I just want to win more races and end the season in the best way possible for the team. If I do that, then the rest will take care of itself.”

Steve Rodgers
Team Owner
“This weekend is huge for McAMS Yamaha. It’s easy to forget this is only the team’s fourth year in the Superbike class, which is widely regarded as one of the most competitive classes of racing in the world. This year has already been our best year in BSB, which is quite impressive considering we’ve only done half a normal season. Four race victories and 12 podiums is a great season and it’s not just been the team’s best year in BSB, but it’s been Jason and Taz’s best year in BSB to date too.

“With that in mind, we can leave Brands Hatch with our heads held high whatever happens this weekend. However, we are still in this title fight and we’re going to give it everything we’ve got to try and take that crown. BSB is never easy and Donington saw Josh build a bit of a buffer in the championship standings and that buffer takes some of the pressure off us, as as long as our riders do their best to win the races, the rest can sort itself out.”